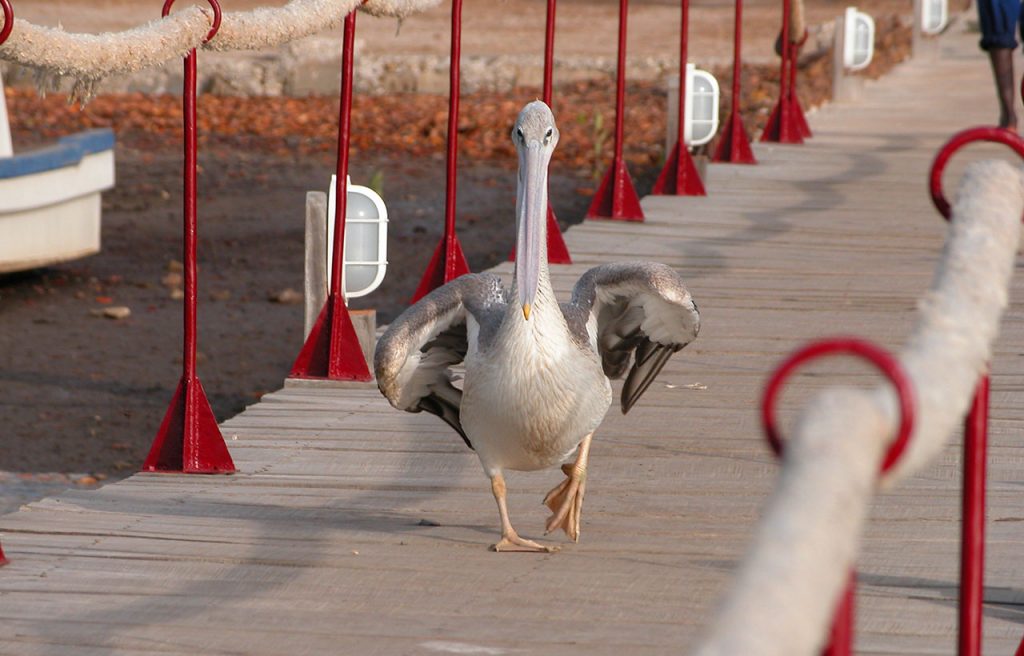 Your new partner in ORNITHOLOGY

The lodge-hotel Keur Saloum in Toubacouta (www.keursaloum.co), whose name is intimately associated with ecology and the protection of biodiversity, decided to develop activities related to discovery, observation, knowledge and protection of Senegal’s birds. We realized this with diverse Senegalese and European partners.

Senegal is, indeed, one of the West African countries where the birdlife is the most important in variety and quantity. This is not surprising, as the diversity of biotopes is invaluable: from the north to the south of this country, without forgetting a maritime facade of more than 700 km, the most ornithological sites succeed each other at a steady pace.

In addition to the presence of many endemic and sedentary species, Senegal is a huge land of welcome for multiple species of migrants, looking for food, heat and rest.

That’s why my wife Simone and myself, Alain Goetghebuer, at this day concretize a dream of more than 12 years (which motivated, at the time, the acquisition of the Keur Saloum lodge-hotel) and decided to create a GIE which will be named:

We are headquartered at the Keur Saloum Lodge-Hotel in Toubacouta, Senegal and our main function will be to organize ornithological and animal trips and to present ecosystem discovery programs in the Saloum Delta.

Our partners on the ground

Christophe Camara and Dembo Mane, who are in the permanent service of Keur Saloum, as well as that Abdou Carlos Lo, independent guide, who is trilingual (French, Spanish and English).

We also often use “écogardes“, like Maguette L. Diop, who have received excellent training from the Administration of National Parks of Senegal.

The team will often be led by European birdwatchers and patented animal photographers who assist and supervise their customers.

In order to ensure the seriousness and durability of our initiative, we asked for and obtained the recognition and support of the Minister of the Environment, Mr. Djibo Leyty Ka, as well as his Director General of National Parks of Senegal, Colonel Mame Balla Gueye.

Why did we plant our tents in the Saloum Delta to give ourselves to our, and your passion: ornithology?

1. The geographical situation of the Saloum Delta

The immense delta formed by the Sine and Saloum rivers constitutes a very privileged site because ecosystems are unique there. We observe the juxtaposition of huge mangroves with Guinean-type dry forest, wet sand fringes that unveal  at low tide, mud flats, dry savannas and numerous groves of baobabs, among others.

The grandiose landscapes and the impression of infinity that emerges makes the place a real masterpiece of nature. The visitor immediately feels seduced by splendor and grandeur places, as well as the feeling of peace and eternity that emerges.

It is, moreover, obvious that the low density of the human population, as well as the type of land use by subsistence agriculture, without pesticides or chemical fertilizers and the total absence of a polluting industry contributes to the maintenance of these privileged areas.

2. The abundance of birdlife

It goes without saying that these timeless territories shelter an incomparable bird life and an extremely diverse one. Sedentary bird species are legion and sometimes unique, such as the Great Hornbill of Abyssinia, the Grand Duke of Verreau, the Heron Goliath or the Eagle Vociferous.

These birds, more or less rare, mingle with a multitude of more common birds, like the Ardéïdés of all kinds, the Pelicans, the Cormorans and Anhinga, the Gonoleks, the Little Hornbills, the Cuckulas, the various species of Columbidae and Raptors, and the Passerines of all kinds.

The Saloum Delta hosts, in addition, in the winter, millions of migratory birds from Europe and Asia. It is mainly (but not exclusively) waterfowl which feeds on large mud flats left exposed during low tides. The most spectacular ornithological attraction is, without question, the visit (during the winter: from May to September) of “Bird Island” located in the ocean, off the delta.

This island is home to the largest nesting colony in the world of Royal Terns, as well as many pairs of Caspian Terns, Scavenger Gulls and Gray-headed Gulls. In recent years, there are also a few pairs of Dominican gulls. There are more than 70,000 nests per year in this island.

Anyway, ornithologists and specialists of West Africa, agree to say that there are more than 600 bird species in Senegal, which is considerable.

3. What are the protections enjoyed by the Saloum Delta?

Senegalese and / or supranational authorities and national institutions have not deceived when protecting these biotopes of inestimable ecological value.

This is the arsenal of protections implemented by the various authorities:

Ramsar Convention, which celebrated its 40th anniversary in February 2011.

4. Why is the lodge-hotel Keur Saloum the point of departure for “Les Rolliers du Saloum”?

You will admit it, the letters of nobility listed above, make the lodge-hotel Keur Saloum, which really overhangs the mangrove as if to better apprehend it, the natural candidate designated to accommodate experienced or novice bird watchers, as well as animal photographers.

First of all, there is our privileged location, overlooking the Bolong Bandiala (the sea arm which flows below the hotel), which gives it a right of guardianship over the surroundings.

The show of nature in motion is permanent and the sunsets are often breathtaking.

Next, the hotel has long been one of the most ardent advocates of the most beautiful mangroves in the world and is constantly organizing ecological trips into this wonderful open aviary.

encompassing the world of reptiles, mammals, insects, birds and fish, as well as plants. This is an exciting faunistic discovery as a whole.

region, involves the establishment of an important stewardship, allowing them to indulge

thoroughly at their leisure.

The hotel therefore offers the following working tools to its followers:

We simply apply the rates of the structure in which we are hosted, namely, the Keur Saloum Lodge-Hotel. These tariffs are not accessible on the internet, because of the diversity of the possibilities offered and also the peculiarities of a trip that you would have developed yourself.

But we are committed to providing you with these rates on the first request. As for the price applied for travel by car or dugout, as well as the disposition of our auxiliaries. It is calculated piecemeal, according to the distances traveled or the duration of the benefits.

The association “Les Rolliers du Saloum” is based at the Lodge-Hotel Keur Saloum, in Toubacouta.

Let us make a mutual agreement: The professionalism of any member of the “Rolliers du Saloum” team will make you and us privileged and recurrent partners.

Let us make a mutual agreement: The professionalism of any member of the “Rolliers du Saloum” team will make you and us privileged and recurrent partners.